An experienced boater was doing a seasonal maintenance run on his large powerboat when an electrical fire broke out in the engine room.

Enroute to St Kilda he decided to anchor off Station Pier. Once he dropped his anchor, he smelt electrical burning and entered the engine room with a torch to investigate. He spotted smoke coming out under a shelf with wiring.

He then ran back up to the helm to get an extinguisher (initially unsure where the closest one was), discharged the Dry Chem and called Triple Zero (000) in case the fire got away from him. He was satisfied that he had it under control, and nearly considered starting the motors to get back to his berth, before accepting a tow.

When electricians came in the following week, they found the source was a three-way connector that had failed internally – coupled with a circuit breaker on the switchboard that did not trip, due to salty build up.

While the fixed fire extinguishing system was not used in this case, it is an important piece of safety equipment to maintain, along with portable fire extinguishers.

Knowing where your equipment is located will assist in initiating a rapid response. Whatever size boat you own, fire safety equipment can prevent small fires from escalating into total losses and reduce your reliance on external assistance.

Learn how to prevent boat fires 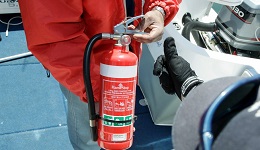 Will your fire extinguishers work properly in an emergency?

Extinguishers on boats are often subject to adverse conditions; being exposed to weather and salt spray, along with vibration and violent movement due to the motion of the sea.

Make sure your fire extinguishers are free from rust and damage, and easily accessible – not blocked or covered by other gear. Professional servicing may be required depending on the type of extinguisher you have. Refer to the manufacturer's instructions.

Learn how to maintain your fire extinguishers