A recent incident shows how quickly a situation can change, and how important it is to have your safety gear to hand.

Two boaters were in a vessel on 7 April but, when one of the men tripped and fell, their boat capsized around 11.15pm.

The 3.9m Stacer capsized off the Grain Pier at Geelong, adjacent to the No. 1 channel marker.

While the pair had all the required safety equipment onboard, it capsized with the vessel and their mobile phones were rendered useless by the water.

Fortunately the two men were wearing lifejackets. The master of the vessel was holding a waterproof torch, so they were able to signal their predicament to nearby vessels who came to the rescue.

The boaters spent only about 10-15 minutes in the water and were given the all clear by Ambulance Victoria. The vessel was recovered from the water later in the night.

Despite being prepared and experienced, the boaters ended up in the water with no real means of raising the alarm and, with just a torch, were extremely lucky to be rescued. 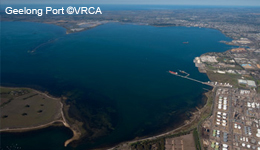 Read our advice about what to do in an emergency.