All vessels must show lights if operating at night or in restricted visibility. Even a vessel that does not travel between dusk and dawn may still need to show lights, for example, during a heavy rain shower or when at anchor.

Vessels operating by sail or rowing are required to show different lights to those motoring. However, a yacht must comply with the power vessel lighting requirements when under motor.

For the requirements of different types of vessels, refer to the navigation lights page.

Are your lights correctly fitted?

These guidelines have been developed for powered vessels less than 20m in length and can help you:

By law, navigation lights and their installation on recreational vessels are required to comply with the positioning and technical requirements of the International Regulations for Preventing Collisions at Sea 1972 (COLREGs) which has been adopted in Victorian marine safety law.

Navigation lights must be installed in accordance with the manufacturers' instructions. Navigation lights should be mounted so as to minimise damage caused by contact with other objects under normal operating conditions. For example, lights mounted on the topsides of smaller crafts can be damaged when coming alongside a wharf or pontoon, and lights mounted at the bow near anchor fittings can also be vulnerable and need to be protected.

Navigation lights must be installed to prevent the lights from shining into the operator's eyes. For open vessels, this can be achieved by using a shielded light on a mast or pole. This could also be achieved by placing the light support behind the operator and above head height, rather than in the bow or amidships. Some LED lights are less prone to affecting night vision than conventional incandescent lights.

The lights should be wired so that one position of the switch turns on all the required running lights and a different position turns on just the anchor light. Alternatively, two switches that achieve this same result could be used.

Which light fittings to use

Any navigation light that is fitted to your vessel must meet the requirements of the COLREGS.

Pay particular attention to the shielding arrangements to ensure the light only shines in the correct direction and there is no overlap on combination lights. An all-round white light shows over a nominal arc of the horizon of 360 degrees. The light fitting must be located at least one meter above the sidelights and should, as far as practicable, be on the centreline of the vessel.

As general rule, an all-around white light should not be obscured by masts or other structures by more than 6 degrees of arc. If that's not possible, or the light would be shine into the operator's eyes, a masthead light in combination with a stern light is an alternative to an all-round white light. 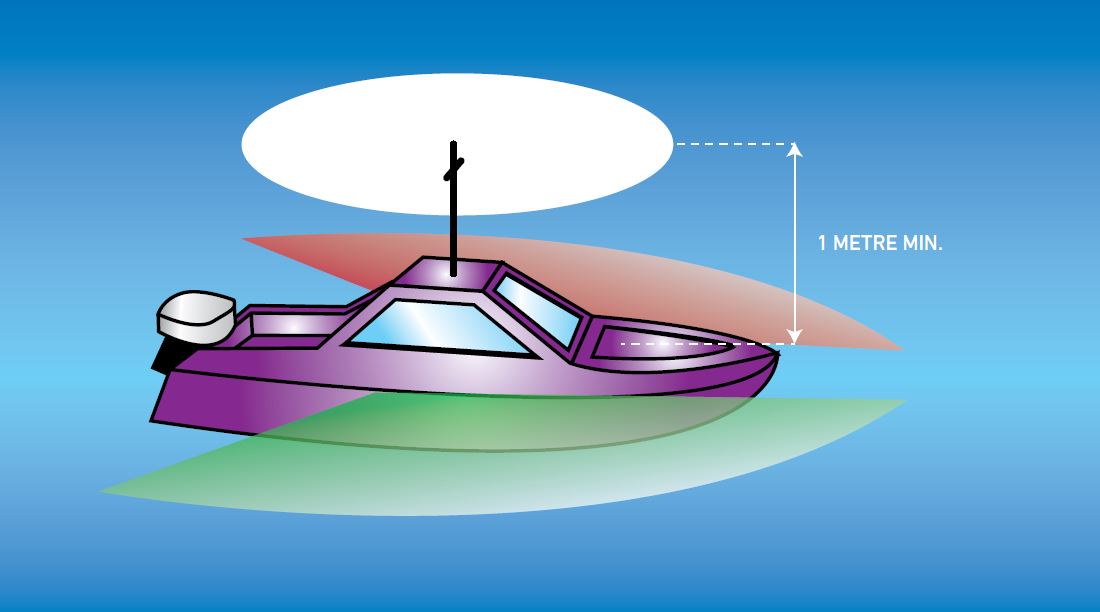 Vessels over 12m in length are required to have a white masthead light, mounted at least 2.5m above the gunwale that shines forward over an arc of the horizon of 225 degrees, so that it can be seen from ahead of the vessel to just aft of the beam. In addition, regardless of the vessel's length, the masthead light must be located at least one metre above the sidelights and should as far as practicable, be on the centreline of the vessel. A stern light is located near the stern to show a white light over an arc of the horizon of 135° behind the vessel. On an outboard craft, it may be necessary to mount the stern light on a mast, or to one side of the vessel, to avoid the motor obscuring the light. 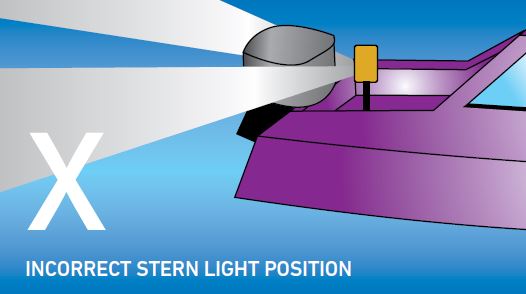 Most vessels need to have a port (red) and a starboard (green) side light each showing an unbroken light over an arc of the horizon of 112.5°. If the design of the vessel allows, a combination port and starboard light unit can be mounted on the centreline of the vessel, in
place of two individual side lights.

Be careful not to mount lights on a horizontal surface if they are designed to be mounted on a vertical surface, and vice-versa, because they will shine in the wrong direction.

Horizontally mounted side lights generally come with a reference line marked on them which must be kept parallel to the centreline of the vessel when fitting the light.

Vertically mounted side lights must be fitted with the back of the light parallel to the centre line of the vessel so that the light will be visible in the correct sector and the lights don't cross over.

This means when lights are mounted on a vertical or near vertical surface that is not parallel to the centre line or not vertical, a wedge or similar must be provided to achieve the correct alignment inboth planes.