The system of navigational aids in Victorian ports and around the coast is the IALA Maritime Buoyage System A.

The buoyage system – made up of beacons, buoys, seamarks and small lights – assists the safe and easy movement of vessels.

To navigate safely, you need to know each marker and the meaning of its colour, shape, topmark and light combination.

Note: When the light exhibited is not white, the colour is indicated in the chart abbreviation by Y (yellow), R (red) or G (green), for example, Fl.(4)Y

The period of a light (time between the start of successive sequences) is indicated in seconds by the letters, for example, Fl.R.5s means a single red flash every five seconds. It is necessary to know the direction of buoyage. On the Victorian coast, this runs from east to west and into ports from seaward.

In order to navigate safely it is essential to know the direction of buoyage. On Victorian coastal waters, buoyage runs east to west through Bass Strait and from seaward inwards to ports, harbours, rivers, estuaries and other waterways.

As Western Port has two entrances, boundaries are laid down to indicate where the direction of buoyage from each entrance meets. They form a line from just north of Lang Lang River to Palmer Point (French Island) to Observation Point (Phillip Island).

You need to know the direction of north and the other main points of the compass. It is an offence for any person to interfere or tamper with, or obstruct the use or operation of, a navigation aid.

There are five major types of marks under the IALA System A: lateral, cardinal, isolated danger, special and safe water.

These are used to indicate the port (left) and the starboard (right) sides of the channels when travelling into port.

These are red and the basic shape of the buoy (and topmark when fitted) is cylindrical (a can). Such a mark would be on the port side of a vessel when travelling in the direction of buoyage.

Colour: Red
Shape: Cylindrical (can), pillar or spar
Topmark: If fitted, single red cylinder (can)
Lights: Red (when fitted) and may have any rhythm other than composite group- flashing (2+1). They are used on modified lateral marks to indicate a preferred channel.

These are green (occasionally, black may be used) and the basic shape of the buoy (and topmark when fitted) is conical. This mark would be on the starboard side of a vessel when travelling in the direction of buoyage.

Colour: Green
Shape: Conical (cone), pillar or spar
Topmark: If fitted, single green cone point upwards
Lights: Green (when fitted) and may have any rhythm other than composite group-flashing (2 +1). They are used on modified lateral marks to indicate a preferred channel.

When marks are numbered, odd numbers are on the starboard side and even numbers on the port side when travelling in the direction of buoyage. They are numbered from seaward to port. These are used to indicate the location of the best navigable water, to show the safe side on which to pass danger (rocks, wrecks, shoals, etc.) and to draw attention to a feature in a channel.

To understand the meaning of a particular cardinal mark, the navigator must be aware of geographical directions and therefore needs a compass to determine where the best navigable water lies.

The mark is placed in one of the four quadrants: north south, east or west. If in doubt, consult the chart.

Colour: Black and yellow horizontal bands are used to colour the cardinal marks and indicate the type of cardinal mark. Topmark cones point in the same direction as the location of the black bands on the marks.

Shape: The shape of a cardinal mark is not significant, but in the case of a buoy it will be a pillar or spar.

Topmark: The most important daylight feature of the cardinal mark is the black double cone topmark and the four different arrangements that indicate the relevant direction from the mark.

The number of flashes corresponds to the numbers on a clock face:

Topmark consists of two cones point to point. The mark has yellow/ black/yellow bands. When lit, a west mark exhibits a white light flashing in groups of nine quick or very quick flashes. Pass on the western side of this mark.

Topmark consists of two cones pointing up. The mark has a black band over a yellow band. When lit, a north mark exhibits a continuous quick or very quick flashing white light. Pass on the northern side of this mark.

Topmark consists of two cones pointing down. The mark has a yellow band over a black band. When lit, a south mark exhibits a white light flashing in groups of six quick or very quick flashes followed by a long flash. Pass on the southern side of this mark.

Topmark consists of two cones pointing away from each other. The mark has black/yellow/ black bands. When lit, an east mark exhibits a white light flashing in groups of three quick or very quick flashes. Pass on the eastern side of this mark.

These are used to indicate a special area or feature, the nature of which may be found by consulting a chart or sailing directions. Some local examples are the spoil ground, pipeline and recreation buoys in Port Phillip and the pilot buoy off Flinders in Western Port.

Colour: Yellow
Shape: Some special marks may be in the shape of a lateral mark.
Topmark: If fitted, is a single yellow X.
Lights: If fitted it will be yellow and may have any rhythm not used for white lights, for example, Fl.Y, Fl.(4) Y.

These are on, or moored above, an isolated danger of limited extent that has navigable water all around it.

Colour: The colours are red and black horizontal stripes
Shape: Spar or pillar
Topmark: If fitted, two black spheres, one above the other
Lights: If lit, the light will be white showing a group of two flashes. It may help to remember this mark by associating the two flashes with two spheres.

Some examples of the isolated danger mark are on the Prince George Bank off Indented Head, Wooley’s Reef at Frankston and Eagle Rock in northern Western Port. Isolated danger marks are not always positioned centrally over a danger and it is therefore advisable to refer to a chart and not to pass too close.

These are used to indicate that there is navigable water all around the mark. These marks can be used as a channel entrance, centre line, mid-channel, or landfall buoy. The Westernport Fairway buoy is a local example of this mark.

Colour: Red and white vertical strips
Shape: Buoy can be a sphere, spar or pillar
Topmark: If fitted to pillar and spar buoys, is a single red sphere.
Lights: If lit, an isophase, occulting, one long flash every ten seconds, or morse ‘A’ (dot, dash) white light is exhibited.

The buoy shape is optional but should not conflict with that used for a lateral or special mark. Operators of vessels are cautioned that large commercial vessels may pass close by these marks.

The term new dangers is used to describe newly discovered hazards not yet shown in nautical documents. New dangers include naturally occurring obstructions such as sandbanks or rocks or man-made dangers such as wrecks.

New dangers may be marked using lateral, cardinal, isolated danger marks or by using the emergency wreck marking buoy. The mark may be removed when the new danger has been sufficiently communicated or otherwise resolved. 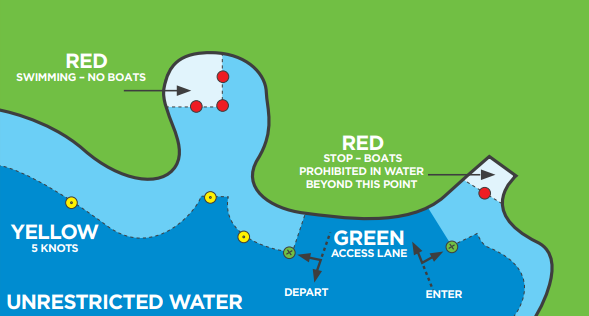 'Stop – no boats' or 'Swimming – no boats': used to mark prohibited water and swimming areas.

Speed restrictions: an area is set aside as a speed restriction zone because excessive speed is a risk to the operator, to other vessels or persons, or to the environment. The yellow buoys may be placed because of local or general requirements for slower speeds.

Access lane: the waters between these buoys are unrestricted to allow the picking up or dropping off of a water skier.

Sometimes signs on the shore are used instead of, or in addition to, marks in the water. Examples of boating signs include “No boating zone”, “special purpose zone” or prohibited zone”.

Access lanes are solely for waterskiing or for launching or retrieving a vessel at a boat ramp when the ramp is located in that area. Access lanes are marked by beacons or signs on the shore with each boundary being delineated by the alignment of an orange disc and a black and yellow triangle beacon. Access lanes provide access to the shore for waterskiers at speeds greater than 5 knots when otherwise it might not be possible. Bathers are not permitted within an access lane.

Special purpose areas, such as kiteboarding areas, may also use onshore beacons to delineate the zone. In this case an orange disc may be used with a black and white triangle. A summary of the information on this page is available to download: buoyage system PDF, 336.2 KB.

If you'd like us to send you a buoyage system sticker, email your name and full postal address to education@transportsafety.vic.gov.au

Learn more: View the IALA NavGuide on the IALA website. 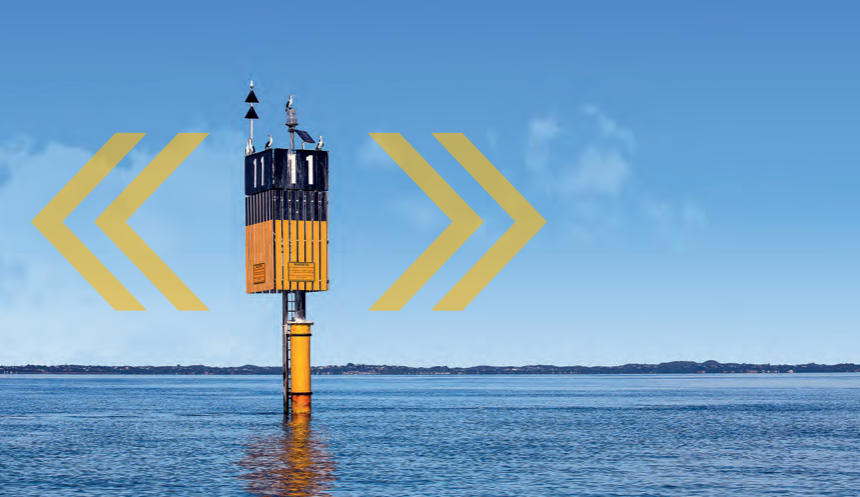